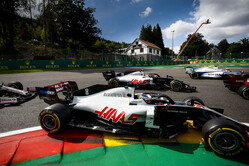 Magnussen also used the Yellow medium tires for the start and rocketed up the order on the opening lap, surging from 20th to 15th, making more gains than any other driver. Magnussen also boxed for hard tires when the Safety Car was deployed, and he came in again on lap 36 for a switch onto the Red soft rubber. He reached the finish line 17th.

Haas F1 Team maintains ninth in the Constructors' Championship with one point. Haas F1 Team will be back in action for the Italian Grand Prix, to be held at the Autodromo Nazionale Monza, from September 4 to 6.

Romain Grosjean: "We wouldn't necessarily haven taken P15 this morning, if offered it, but what we would have taken is to be able to fight with Ferrari. For us, that's a benchmark, and in that aspect we did well. I thought I could keep Charles (Leclerc) behind me, but sadly on the last lap I had a bit of a lock up at turn one - anyway the tires were running out of life. It was fun in that aspect. We did the best behind Vettel and Leclerc; Alfa Romeo did a good job being in front of them."

Kevin Magnussen: "We needed something to help us today, weather or something, but we didn't get any. I had another good first lap though, I'm really happy about that. But from there we just didn't really have the pace, especially on the first stint on the C3 tire. At the beginning of that stint I was very slow, just overheating the tires. I got that under control later on, then we pitted onto the C2 and it was a little bit like that again - just struggling a bit on the first part of the stint but getting better towards the end. I lost a position at the end when we pitted again. It's been a tough day but there was not much we could do."

Guenther Steiner: "I don't have a lot to say today. It was obviously a disappointing result but not unexpected. This is where we are right now. The only way forward is to get better."