Hamilton untouchable as he delivers a Spa masterclass 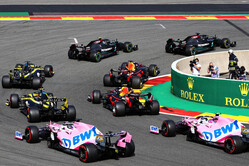 Looking around the headlines this morning, as we head into the Belgian Grand Prix for which his team has (once again) locked out the front row, Toto Wolff appears to be "wary" of everyone bar the Duracell bunny.

Honestly, there's playing the underdog card at every turn and then there's taking the absolute p***, and Toto appears to be doing the latter.

Be it the weather, Red Bull, Ricciardo, tyres, the start, the finish, the middle, Racing Point, Susie's cooking or Lewis getting over-emotional, Toto has a whole litany of things that could (but won't) go wrong.

On the other hand, at Ferrari, poor old Mattia Binotto is overseeing a team where nothing is going right.

Sadly, the weather Gods are unlikely to play a part, and while there could be a little rain at the very end of the race - though unlikely at this stage - for the most part conditions will be ideal for Mercedes.

Of course, it could all go pear-shaped at La Source, as it has done before, but this is something the midfield (cue Mattia) has to worry about rather than the Black Arrows. In all honesty, based on the evidence of the various sessions, nobody is starting out of position, so the 'usual suspects' are unlikely to worry the front couple of rows - not that this will cut any ice with Toto.

All that said, Toto might have something to genuinely fear in terms of Max Verstappen, for the Dutchman has looked strong all weekend. Though the RB16 doesn't have the outright grunt of the W11, certainly in qualifying, on the longer runs so far this weekend it has kept the German team honest.

Furthermore, cat-lover, Alex Albon is looking a lot stronger this weekend. Hopefully a good result will give the youngster a much-needed confidence boost.

If Bottas is to take his second win of the year, and, more importantly close the gap to his teammate, he needs the very best of starts and either nails Lewis at La Source or passes him on the run up to Les Combes. If he fails to do this, it's basically game over for the Finn.

Despite a few technical glitches the Renaults have looked hot, a far cry from the misery that was Barcelona. McLaren-bound Daniel Ricciardo continues to impress, continually getting the better of his teammate - who is no pushover - and showing impressive speed throughout.

As we ponder Toto's negativity, one wonders how he would cope as boss at McLaren or Racing Point, two teams that continually frustrate with their performance swings. When you expect them to do well they disappoint and just as you begin to write them off they hit back.

That said, a strong result for Renault today would certainly add some much needed extra spice to that battle for 'best of the rest' behind Mercedes and Red Bull.

Behind this little lot, in a sort of F1 'no man's land', if you will, we have AlphaTauri, and behind them we have Ferrari.

At Alpha, for the first time this season Daniil Kvyat has out-qualified his teammate, the Russian, fearing he could be dumped for a third (?) time clearly having heard Helmut Marko's recent comments not to mention the new that F2 star Yuki Tsunoda is to test for the team in Abu Dhabi.

Despite the family connections, the Faenza outfit hasn't impressed thus far, and like a couple of other teams has shown erratic consistency.

And then there's Ferrari.

If Toto has a whole list of things to fear, Mattia and the boys have a whole load of things to blame for the team's extraordinary lack of pace.

Stopping short of the Duracell bunny - though give it time - we are told the tyres, aero, the chassis, rules, Seb's cooking, the weather and COVID are to blame, whilst avoiding mention of the elephant in the garage, the fact that the Italian team was essentially caught cheating last year and is still paying the price.

Add in the Maranello outfit's ability to shoot itself in the foot at every given opportunity, its Machiavellian approach to politics, pressure from the Italian media and a team boss who would actually prefer to be back in the engineering department and you have a recipe for disaster.

The one thing the team can be thankful for is that there will be no tifosi present at Monza next weekend to witness this ongoing horror story.

At a time George Russell is anticipating a battle with the SF1000s, it is not unreasonable to suspect that Kimi Raikkonen might give his former team a run for its money also.

Much as we believe Max is capable of pulling off the win today, Lewis is on sublime form at present, and it is hard to see him being beaten on his current form.

While Toto will be biting his nails down to the quick, it's unlikely that he has much to fear, other than Valtteri continuing to lose ground to both his teammate and Verstappen.

The optimal strategy today is a (groan) one-stopper, but as usual the tactics will be heavily influenced by the weather. Aside from the slight possibility of rain, ambient and track temperatures will also play a part.

The fastest theoretical strategy is to start on the softs for 18 laps and then complete the race on the medium. The exact opposite can work too, which is no doubt what Hamilton, Bottas and Verstappen - the only drivers in the Top Ten starting on the yellow-banded rubber - are planning.

The pitlane opens and one by one the drivers begin to head out.

A suspect puff of smoke from Sainz' McLaren sees the Spaniard head back to his garage, where the Ferrari-bound driver jumps from his car. "Something broke," he reports.

Moments later, McLaren announces that Sainz, who qualified seventh, will not start the race after it was discovered that he had suffered an exhaust failure.

Ahead of the race, other than the 'end racism' protocol and the national anthem, there will be a minute's silence for F2 star, Anthoine Hubert who perished here twelve months ago.

"Don't be afraid to use lots of DAS on the formation lap," Bottas is told, and they are not referring to a washing powder.

Other than the leading three, Kvyat, Vettel, Russell, Raikkonen, Grosjean, Giovinazzi, Latifi and Magnussen start on the mediums, while Leclerc is on softs and Gasly hards.

The field heads off on the warm-up lap. All get away cleanly.

They're away! Hamilton holds the inside at La Source, while Ricciardo looks to go around the outside of Verstappen. Behind, exiting La Source, Albon challenges Ricciardo while the Points are side-by-side.

Thy head through Eau Rouge as though tied with string, Bottas tucked in behind Hamilton, Verstappen and Ricciardo, with Ocon right behind, just ahead of Albon who heads the Points.

Up the Kemmel Straight, Leclerc, who got a good start, heads Norris and the AlphaTauris, with Vettel and Russell just behind.