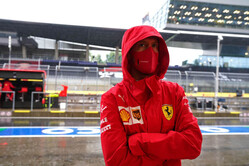 Having realised how off the pace they were at the opening race, Ferrari fast-tracked a number of the upgrades originally to be introduced in Hungary.

However, as his drivers line up 10th and 14th for the Styrian Grand Prix, Mattia Binotto admits that the team is still falling far too short of where it needs to be, performance wise.

"We have to accept that the stopwatch doesn't ever lie," he told reporters. "In two qualifying sessions, albeit in different conditions, we have not been competitive, not only against those who have been our closest rivals over the past few years, but also against others, who up to yesterday were generally behind us."

Indeed, as a clear gap emerges to Mercedes and Red Bull, the likes of McLaren, Renault and Alpha Tauri are challenging the Maranello outfit, and it was only the fact that the Racing Points had a particularly bad session yesterday that things weren't even worse. Indeed, Leclerc was only 0.008s quicker than George Russell in the Williams, who will now start ahead of the Monegasque due to his 3-place grid penalty.

"We worked very hard to bring updates to the car earlier than planned, but they didn't show their worth on track," said Binotto of the upgrades brought to the Red Bull Ring this weekend including a new front wing and floor. "We have to work out why and change this state of affairs, which is just not good enough for a team by the name of Ferrari.

"We mustn't get het up about it, but we cannot ignore the facts," he concluded.

However, while Ferrari continues to blame the SF1000's aero, the performance of the Italian outfit's customer teams clearly suggests that it is the power unit that is the core of the problem, the Maranello outfit yet to rediscover it pace following its controversial investigation by the FIA last year.

"We tried everything we could," said Vettel, "but unfortunately it took too long to get the tyres, especially the fronts, up to working temperature."

"We were just not quick enough today," added Leclerc. "When I look at the gap to the cars at the front, I am quite surprised.

"There's definitely some work to do," he added. "In terms of balance, the car is nice to drive in the dry and in the wet it's very similar. But yes, we've got some problems here and there that we need to solve."

In today's dry conditions and in race trim, the Italian team should get a much better idea of the worth of the upgrades and the mountain it faces moving forwards.