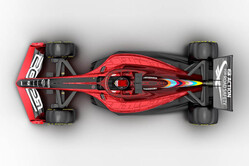 If F1 bosses were expecting the drivers to fawn over the renderings released alongside the 2021 rules package, they will have been left mighty disappointed.

After all, though this is the biggest overhaul of the rules in living memory, we've been down the route of 'improved racing' too many times before.

Leading the sceptics was Sebastian Vettel, an admitted purist ad keen historian of the sport.

“On paper the ideas are always great," he said, "but I think it will materialize a little bit more in the coming weeks.

“I would have liked a different engine," he admitted, the German having recently called for the return of V12s. "No matter how they look, if they are fun to drive and allow us to follow closer than that will be a success.

“But time will tell. A picture is one thing," he smiled.

"For us it's still early days," said Max Verstappen. "I haven't really looked through all the things... I mean it's just announced.

"At the end of the day, it doesn't really matter how it looks like or whatever, as long as it gives us better racing and we can follow better," he continued.

However, amidst fears lap times could be up to four seconds slower than at present, he said: "Of course we want to be within two seconds, three seconds of what we are doing now, definitely, because if it's going to be about four or five it's not what we want, because then it feels a bit too slow.

"But this is just the start of it and I'm sure that teams will come up with a little bit of a different look as well, so let's just find out over time how it's going to work out."

Told that Ross Brawn believes lap times will be similar to 2016, the Dutchman said: "Yeah, I guess... To be honest I didn't really enjoy driving the cars as much back then as I do now, but of course you have to find a middle way in terms of what you want with following and stuff like that. Anyway, throughout the season the cars will improve."

"From my side it doesn't really matter how it looks or the speed of it as long as we have great racing," added George Russell. "I think that's what we all want.

"Obviously the weight is heavier which I think is not ideal for any of us. I mean, even driving like a Formula 3 car it was really fun to drive but it was much lighter than what these Formula 1 cars are. But as long as it improves the racing and brings the field together that's all I care about."

"As long as the racing's better and we all have a chance to fight for wins in different races and as teams we can all fight for being a strong constructor, I think that's the key thing," agreed Lando Norris.

"I've seen the renders our designers are designing and it looks pretty cool," he added. "I don't really mind too much, that's not what I'm fussed about. I'm just fussed about the racing and having fun and being able to follow cars closely and just enjoy racing more than what we do now."

"The main thing is to focus on the racing," said Lance Stroll. "We need to be able to follow closer to one another and to improve the wheel-to-wheel racing, the show for the fans, and I think for us drivers, too, it will be very exciting if we can see closer racing.

"Hopefully it levels the playing field as well. If we can see the gaps reduced to the top teams and there are more opportunities for the midfield teams to score podiums and to fight for positions further up the grid, that would be exciting."