In the previous part of this look back at the first half of the F1 season, you read about the collective incompetence of the likes of Williams and Haas, and Nico Hulkenberg's continued inability to finish on the podium. This time, it's the teams in better shape. There's a couple of surprising names here, not least of which the very first one we'll look at.

It looked like this would be another regular season for Toro Rosso, just like any from the past decade. The sort of quietly steady, unspectacular one where the most you notice of them is when their cars are either suddenly qualifying in the top ten, or retiring from a race.

But no! Courtesy of just one race, Toro Rosso has jumped up the standings to be ahead of some of its more illustrious rivals. If they're not careful, team members will start getting nose bleeds from being so high up the order.

To the amazement of just about everyone, Daniil Kvyat has neither torpedoed any of his rivals off track, nor been replaced. Even more incredibly, Max Verstappen has won two races without Kvyat being demoted; ending a trend that seemed like it was ingrained in the sport.

I, for one, was sceptical of Red Bull's decision to bring Kvyat back, but he has so far justified his place on the grid, taking a remarkable podium in the chaotic German Grand Prix. It was only the team's second visit to the rostrum after Vettel's famous win at the Italian Grand Prix in 2008.

Such is his form, there's has even been speculation he could be promoted back to the senior team as soon as next year. It would, at least, be a nice continuation of Red Bull having to embarrassingly rely on drivers they previously wanted to be rid of. Any return to Red Bull for Kvyat would likely involve Helmut Marko having to eat an enormous slice of humble pie, and issue a grovelling apology for his previous treatment of the Russian - which is probably why he's been overlooked in favour of his rookie team mate for the rest of this season.

Alex Albon has been having a solid debut season and will take the place of the floundering Pierre Gasly from Spa onwards. While it is no great surprise to see Gasly replaced, the decision to promote Albon at this early stage of his career is. He's considered by some of his peers as being another star in the making, but has been thrown head-first into deep end, in a typically brutal Red Bull "sink or swim" approach. Red Bull and promoting inexperienced drivers - name a more iconic combination.

As far as Toro Rosso is concerned, it will be difficult for them to remain this far up in the championship for the remainder of the year. In fact, their attempt to remain this high up will be one of the most intriguing subplots of the second half of the season. We might not have any sort of competition for the championship, but we've got a terrific battle to see who will finish fifth, which just about nicely sums up F1's current predicament.

Sure enough, Fernando Alonso has left the F1 team, and suddenly McLaren has successfully regained some credibility in the first half of this season, showing that not all hope is lost for this once great outfit quite yet.

When he's not busy trying to go viral on social media, Lando Norris has confirmed his reputation as one of the most exciting young talents on the grid, while Carlos Sainz is having the sort of season that will no doubt make Red Bull regret losing him. Both have already been confirmed as the team's drivers for 2020.

Even though they now have a car and two drivers capable of regularly finishing in the points for the first time in about more than half a decade, fourth will probably be as good as it gets for McLaren. In recent races, they have moved into a sort of no-man's land, a long way behind Red Bull but an increasing distance in front of those behind.

Once upon a time, a fourth place finish would've been considered a bad year for McLaren. It's a graphic illustration of just how far they've fallen in recent times that they'll likely be very pleased to remain here, given their travails of past seasons.

But if you thought McLaren could last a full year without some highly public humiliation, then think again! This time it was failure to qualify with Alonso at the Indianapolis 500, through a combination of not having a spare car painted in the correct shade of orange ready, mistakes made converting inches to millimetres, wrong gear ratios and faulty tyre sensors.

Much like a long suffering spouse finally filing for divorce after their partner's latest embarrassing drunken antics at a family gathering, this seems to have been the straw that broke the camel's back for the Alonso/McLaren partnership. Reports have suggested that the two have gone their separate ways - in what must surely be the least surprising news not just of this season, but indeed of recent years. 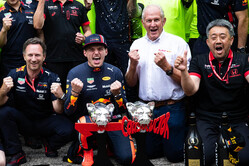 Up until recently, it was looking like yet another season of Red Bull comfortably leading the chasing pack, but not being quite able to challenge Mercedes or Ferrari consistently. Rinse and repeat.

Yet two wins in the space of three races for Max Verstappen has vindicated Red Bull's switch to Honda power after a somewhat subdued start to the year. The years of painful struggle, back when Alonso famously claimed they were "GP2 engines", are finally starting to be forgotten for the Japanese manufacturer.

Verstappen continues to mature into one of the strongest drivers on the grid - his difficult start to 2018, when he crashed into everything that moved and even some things that didn't, is also but a distant memory by now. While his driving style continues to delight and horrify in equal measure, Verstappen remains the best hope of seeing a non-Mercedes driver crowned as champion this year. But it is still fairly unlikely, barring some catastrophic Ferrari-style meltdown for Mercedes in the second half of the season.

That's the good, as far as Red Bull is concerned. Now it's onto the bad.

Pierre Gasly has had nothing short of an... ahem... ghastly season. It has felt at times like Red Bull has only had one car in the race, such has been Gasly's under-performance, which cynics may claim is what the team has always wanted anyway. After crashing the car twice in pre-season testing, things really haven't got any better for poor Pierre, who finished a lapped seventh and failed to see the chequered flag in the two races his team mate won.

Following the Hungarian Grand Prix, Christian Horner was quoted as saying that Gasly would remain at Red Bull till the end of the year. Which, of course, ultimately meant his days were numbered - barely a week later, it was confirmed Gasly had been demoted to Toro Rosso. If you feel sorry for Gasly, just consider that given Red Bull's much depleted junior driver programme, there's a fair chance he could end up back here just in time for the new regulations being introduced for 2021.

Alex Albon enters the lion's den for the second half of the season, and will likely be under pressure to perform immediately. It feels a bit like Red Bull hasn't learnt anything from their past mistakes - rushing an inexperienced driver to their top team in place of an inexperienced driver who had been rushed to their top team. Still, if Albon's place here is short-lived, he'll at least be able to drown his sorrows in good company with Gasly and Dan Ticktum.

Red Bull's decision making when it comes to drivers has always been bizarre at the best of times, perhaps no more so than now. To think this whole sorry saga could've been avoided if they'd just signed Carlos Sainz instead of Gasly. But no, that wouldn't have worked, because while they'll pretend otherwise, what Red Bull is really after is a driver who will do a respectable job, but not upset their star driver. Good luck, Alex.

Quite frankly, this entire piece could be devoted to Ferrari. Most expected the inevitable yearly implosion again - but very few thought it would come as early as the second race of the season.

Through a potent combination of unreliability, driving errors and sheer pit wall incompetence, Ferrari's title hopes have disappeared quicker than a mirage in a desert. The question is no longer whether they can win the championship, but whether they can actually win a single race this year.

Of course, there's has been a fair amount of bad luck for the Scuderia. Leclerc's engine problem while on course for a certain win at Bahrain was one such instance, the farcical penalty at the Canadian Grand Prix for Vettel another.

But the instances of Ferrari being in a position to win have been few and far between. Toto Wolff's desperate assurances that Ferrari goes to the next race as favourite have increasingly looked like the rantings of a man far removed from reality.

Even when Ferrari does have a car to rival Mercedes, they still somehow manage to find ways to mess up, as we saw most evidently in Germany. On a weekend where they'd been fastest in every practice session, mechanical issues affected both cars in qualifying and meant a potential 1-2 on the grid became a 10-20. Perhaps even more sobering was the best placed Ferrari finishing over a minute behind the winner at Hungary, and there's a very real chance that they could end up losing second place in the championship to Red Bull.