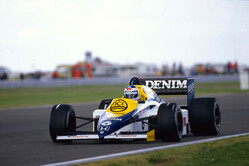 Dear reader, Mr Stefan Johansson has provided what I will call a thought-provoking 'Straw-man' for our consideration.

In the engineering world a straw-man is offered to give a complete start point for discussion and refinement as one knows it is not going to be the final product, but a step in the right direction, and enables people to grapple with the entire problem, rather than what can appear to be 10,000 unrelated parts. My thanks to Mr Johansson for a well-considered article.

...and now, firmly in the interests of defending engineers everywhere, and providing a polite repost to keep the discussion going, I'll offer some gentle pokes to this straw-man and see what remains standing, and what floats as chaff to the floor, to be swept politely into the Pitpass broom cupboard, where they can join a few "Super Bowl Experience" moments that have been gathering dust for some time now.

In his introduction Mr Johansson states: The younger generation doesn't seem to care, F1 and motorsport in general is struggling to catch their attention.

This addresses our first issue. With the motor car over 100 years old, with self-driving cars probable within the decade, and with many under-30 folk using Uber, with a twist of public transport, we are indeed struggling to catch their attention. Many folk no longer care. The esteemed Mike Lawrence wrote some time back how Motorcycle Speedway was immense in Britain just after the Second World War. And yet a seemingly monster of sport simply faded away. Is it that Formula One as a main stream sport is fading away, and as I suggested sometime back in Goodbye Horseless Carriage, are we gracelessly sliding into being a minority sport for the monied few to race, and the caring few to watch?

Next Mr Johansson split is argument for improvements into four main categories; Economics, Competition, Entertainment and Relevance. I will address each in turn, but with reducing detail, as there is some overlap between categories. So come! Let us shake the Johansson straw-man and see what straw-man 2.0 arrives trim and chipper on the Pitpass desk.

Mr Johansson places the blame for soaring costs on the endless development wars between teams, and quite simply we agree. Yet endlessly seeking improvement is part of the human condition, especially among sports-folk. Can you imagine an Olympics where each track team arrived and pronounced, "Well, given how amazing Usain Bolt was, we've dialled training back 10%, eaten far more pizza and not got stressed. Let's call him the best, and our goal is to be within 15% of his time, give or take."

I do not think we'd be too impressed. The endless and relentless seeking of perfection appears to be genetically coded within us. So we have to allow continued improvements, just at a more affordable level.

Mr Johansson then singles out the aero-race and the engine-race combined with the FIA decision to make things last race-after-race as prime suspects in pushing costs too high, and then sprinkles a generous topping of manufacturer demanded pointless "road relevance" on top to ice the cake.

As Miss Physics would politely point out unless one wishes to race in a vacuum one has to deal with aerodynamics, unless one elects for an aquatic fun-feast in which case she will cheerfully point you to the similarly constructed laws of hydrodynamics to keep you busy. Daniel Bernoulli is to blame for releasing his book "Hydrodynamica" to a curious public in 1738. What later became known as the Bernoulli Principle states that as speed of a fluid increases there is a simultaneous decrease in pressure, or a decrease in the fluid's potential energy.

Skip forward 281 years, add dynamic lift, drag, aerofoils, and mix with a generous helping of Newton's Laws of motion... and hello Boeing 747, Starlifter, unstable Ford Sierra's, and modern Formula One cars. A classic example of not listening to Miss Physics is the Ford Tickford Capri of the early 1980's. This turbocharged, monster of plastic, metal and (optional) leather trim reached 60 mph in around 6.7 seconds, before rocketing on to an impressive for the day 137 mph. A shame the front of the car generated lift, not down force, and the steering went light as the tyres lifted once a touch north of 100 mph. A handful to drive requiring nerves of steel and a highly reactive driving style? Indeed. Great fun? Well, rather depends on how long one wanted to have this style of fun.

Many engineers, technicians, general science nerds and geeks are fans of Formula One and understand the concepts involved, and grasp what each team is trying to do as they fiddle with turning vanes, end-plates, front wings, rear diffusers and all the rest. No, the average curious fan or modestly maths-capable engineer could not design any of them, but we can understand the issues being addressed, and get excited by new developments, and hence, the development race.

Standardising aero is not the answer. Limiting maximum aero is not the answer, because with the aid of their super-computers all the teams would flat-line at the maximum within a season or two. Framing rules that allow for creative solutions, is half the answer, and providing a budget floor (more on that in a moment) rather than a cost cap (impossible to correctly police, refer to the wobbling Tower of Turtles, and A Crisis Carol Coda for our most recent discussions of this topic).

Hybrid power trains. Mr Johansson's suggestion later in his article for an energy equivalence rule is sound, and one that with care could be applied. It also aligns with previous discussions on Pitpass about just such an approach. The prescriptive rules of the FIA have forced us into a situation where one, and only one, hybrid approach is valid. As I've previously noted 'Road Relevance' only exists as a concept to allow the rabid racers within the huge manufacturers to justify to the Board why spending zillions on racing (other than brand recognition) is justifiable and desirable. Then making these engines last for so many races, only pushes the cost higher! I have previously lamented that the otherwise razor-sharp mind of Max Mosley appears to have left the room when he pushed for this approach on the ground of cost saving! A disposable 700 bhp engine that only needs cover one race distance before a rebuild is always going to be cheaper to build than one that must last three, five, or more races. Go back in time to the turbo era and qualifying engines, practice engines, and then race engines for a race weekend, and the total season cost for engines was still far, far less than today!

Apply an energy equivalence rule, and limit teams to two engines per weekend per car before penalties apply. Hello innovation.

Next Mr Johansson points an accusing finger at forcing teams to build their own stuff rather than buying off the shelf. As an engineer that loves this side of the sport I am not keen on standardisation. As with the aerodynamic counter-argument above, I love following how teams tackle the various issues of building 'The Package'. Later in his article Mr Johansson calls for nearly everything apart from the custom-fitted driver's seat to be off the shelf.

Not a surprise really. There is an old saying that runs along the lines of "Never ask a Fishmonger if you should have fish or sausages for dinner". The point being the Fishmonger will always recommend the fish. Being a former Formula One driver, Mr Johansson is highly biased towards the driver's side of the equation, which is fine (not withstanding that he was also really rather good at it). Much of his revision of the sport could be summed-up as; "Get the dang engineers out the way, give us over-powered fast cars, and let us gladiators race!" From this perspective standardised parts across the entire engine and chassis are of no relevance to our red-mist gladiator who is only too keen to drive at eleven-tenth's around Monza's Parabolica – once returned to its original profile.

Why not create an Amish Formula One where we simply freeze the rules as per 1979? Jean-Pierre Jabouille won the French GP on 1st July that year at Dijon. It marked the first win for a turbo-powered car. A car, that if one follows many of Mr Johansson's recommendations one would come rather close to recreating. It's also the very same race in which Gilles Villeneuve (Ferrari) and Rene Arnoux (Renault) battled mightily for second. In one of the comments about Mr Johansson's article a reader noted they had the good fortune to know Gilles, and that 40 years ago he was making the same complaints as raised in Mr Johansson's article, and offered rather similar solutions! From the driver's perspective it will ever be thus. "Give us all wild beasts to tame, too much power, too little grip, insane corners, and then get the pesky nerds out the way and let us race!"

While some standard parts might well be of benefit, too many will simply make Formula One a one make series, and over time it will be even less relevant to the road-going beasts we can observe (McLaren Senna anyone...?) that could in the years ahead actually lap any given circuit faster than the frozen Formula One cars. Certainly, the drivers will be having a ball racing wheel to wheel, but the fans will be even more disengaged.

Force too many standardised parts into Formula One and we would need to revise the "Constructor's Championship" to either a "Kit Assembler's Championship", or possibly a "Pit Crew Championship". Again from a driver's perspective this would fall into the "No loss to me" category. From a team's perspective it would fall into the "Why bother?" Category, which is why Mercedes and Ferrari oppose too much standardisation. They need to be able to differentiate themselves via excellent engineering. It is not useful for Toto to stand-up and say, "This year Mercedes fitted Lewis' seat perfectly and then we all stood back. It's all him. Nothing to do with us. He could have won in any car on the gird this year, and we are really lucky I could persuade the board to pay Lewis' salary, because whoever has him in this one make series will win."