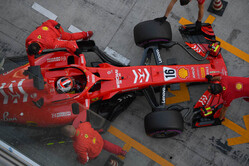 Charles Leclerc topped the Yas Marina timesheets today on his debut with Ferrari since being announced as teammate to Sebastian Vettel for the 2019 season.

"Of course it was emotional," admitted the 21-year-old. "Because driving a Ferrari is special and because this was a day I had been waiting for, for so long without being sure if it would ever happen.

"I am pleased about that and with the work we did," he added. "We got through all our programme which centred on comparison testing between this and next year's tyres.

"For me, it was important because I also got to know the team better, although some were no strangers to me given my time with the Ferrari Driver Academy.

"Over the next few weeks, I will work to be in the best possible shape and to learn from everyone in the team and my team-mate. I can't wait for next season to start..."

Second quickest was another 'debutante', Pierre Gasly, who will partner Max Verstappen at Red Bull next season.

The Frenchman completed 129 laps, like Leclerc, posting his best time on the 2019 version of the hypersoft.

Having shared the car with Sergio Perez yesterday, today Lance Stroll had the VJM11 all to himself.

At Mercedes, Valtteri Bottas signed off on his season with one final day of 143 laps in the championship winning W09. His best time of 1:38.488, set on the hypersoft, put him fourth on the timesheets.

Like yesterday, the focus was on long runs with the 2019 tyres, learning about the characteristics of the different compounds. The team also spent time comparing the 2018 and 2019 tyres.

"It's been another good day," said the Finn. "We managed to complete even more laps than yesterday. Today we worked on compound scans, trying all the 2019 compounds from the hardest to the softest rubber. We focused on medium and long runs, gathering plenty of data and learning about the tyres.

"This week we've got lots of data for the team to analyse over the winter and we can't wait to dig into it. Today was my last time on track with the W09, so I enjoyed it. It's been a good car for us and it was nice to say goodbye. It's been a long season, but everyone was still pushing this week, working like clockwork. Thanks to everyone for all their hard work this year."

"It's nice to get to the end of the test having had a fault-free and productive two days with Valtteri," said Andrew Shovlin. "It's also the last proper laps we will do with the W09.

"We have a lot of good memories working with this car over the last season, it certainly hasn't been easy but the racing has been great fun and it's a year we won't forget for a long time.

"We spent the day focussing on longer runs and characterising the compounds so that we can start work on our tyre selection for the early races. We also did some more comparisons of the 2018 to 2019 casings and have furthered our learning from yesterday. We've got a lot of work to do back at base to go through all the data that we've collected and make sure we're well prepared for the early races next year.

"Finally, I'd like to thank everyone who has stayed for the test and worked so hard to make it a success."

Carlos Sainz made his McLaren debut, the Spaniard only just missing out on completing the most laps by 5, Daniil Kvyat taking that particular honour.

On the other hand, the former Renault driver finished the day higher up the timesheets, courtesy of a 1:38.547, which put him fifth.

The Spaniard spent time adapting to the controls and settings of the car, as well as learning the relevant processes and procedures to enable him to feel comfortable behind the wheel. In addition, he performed valuable tyre evaluations, comparing both the 2018 and 2019 compounds.

"Going out of the garage today on my first day as a McLaren driver was pretty much a dream come true," said Sainz. "When I finally completed my first run I felt extremely good, and I must say it's been a very straightforward day.

"The team has made me feel at home from lap one and from day one yesterday when I started working with them. I did a lot of laps today and I'm grateful to the team for giving me such a reliable car to be able to initiate me in this new chapter and new style of car.

"From the first lap to the 150th lap, I enjoyed them all; the feeling was good and we've been able to end the season in the best way possible. As soon as I got out of the box I felt comfortable in the car. Of course, there are always going to be details to improve and new things to adapt to, like the seat and the driving style, but from the first lap I could spend time adapting and getting to know all the new controls and procedures. It's been great.

"It's been an intense few days after the race finished here in Abu Dhabi, learning a lot of names and understanding how the car works. I'm looking forward to spending more time back at the factory over the winter getting to know the team better and preparing as much as we can for 2019."

"Today was an exciting day for the whole team," said Sporting Manager, Gil de Ferran. "The main goal today was familiarisation with each other, which we achieved in spades.

"We completed a great number of miles and performed all the tests required by Pirelli.

"In closing, on this, the last day that our Formula 1 car will turn a wheel this year, I'd like to officially welcome Carlos to the team, and once again thank everyone that has contributed to the enormous effort put in during the 2018 season. Enjoy your break!"

With Daniel Ricciardo not allowed to participate in the test with his new team, Artem Markelov took over from Nico Hulkenberg, the Russian driver completing 129 laps on his way to the sixth best time of the day.

Once again, Williams split duties between George Russell and Robert Kubica. Over the course of the two days the Briton completed 97 laps and the Pole 71.

"The focus was on the 2019 specification tyres," said Kubica, "it was very important to understand what's the difference and if there is any difference.

"At the moment we are testing in very hot conditions," he continued, "but winter testing and the first few races will be in different conditions.

"We will go through the programme we ran over the last two days, and I'll sit down with the guys and George to decide on the tyres for winter testing and the first four races.

"Additionally, it was a good opportunity for me to get back in the car, to go through different tyres, but also to warm up the muscles before we recharge our batteries. Winter will be long, and we will prepare over this time ahead of the upcoming season.

"I am working well with George. He is very nice guy, and we have a good collaboration which is key for us and for the team. All in all, the test was good, and I am looking forward to 2019.

"I am very pleased with how my first test with Williams has gone, overall it was very positive," added Russell. "It has been fantastic to get to know everybody and gain an understanding of how the team works, and of course driving the car. I was pleasantly surprised with how the car was feeling and I think we made some good steps ahead of 2019.

"The tyre test was very beneficial to the team, they have gathered some really good information, which provides a great idea going into the first test and races.

"Working with Robert during the test was great, he has so much engineering knowledge from his past experiences. I believe we can have a positive effect and push the team in the right direction to get more performance.

"There is no time to rest over the next few weeks, I will be very busy attending events such as the BRDC awards and a Mercedes event. On top of that, a lot of work in Grove with Williams, and preparing for the 2019 season to make sure that I am physically prepared come the test."

Check out our Wednesday gallery from the Yas Marina test, here.