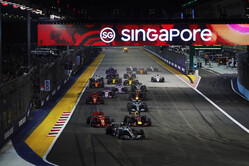 It's fair to say that the dramatic overhaul of the F1 timing app in time for the Singapore Grand Prix was F1's own 'New Coke' moment, fans reacting in horror to an update that left the app essentially unfit for purpose.

Reacting to the outcry, in time for this weekend's Russian Grand Prix, Formula One Management has released a stand-alone version of the old app featuring all your favourite screens and info.

"The launch of our new F1 app didn't quite live up to your expectations," said FOM in a brief statement, "and Live Timing didn't deliver the great mobile F1 experience you previously enjoyed. We've taken your feedback seriously. And we're working hard to make the F1 app even better.

"In the meantime, we're launching a dedicated F1 Live Timing app, to sit alongside our F1 app, so you don't miss a millisecond."

The app, which can be downloaded in addition - and alongside - the updated version, which F1 says should be kept, can be found here for Android and here for IOS.