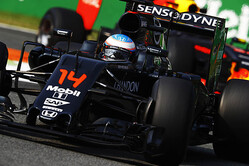 Fernando Alonso has reiterated his threat to walk away from F1 unless 2017's new regulations improve the sport.

Rather than the trials and tribulations of McLaren's re-teaming with Honda, which appears at times to take two steps forward then three back, it is his dissatisfaction with today's racing that has driven the Spaniard to the point of saying 'enough'.

In many ways, the difficulties with McLaren-Honda has inspired Alonso to some of his finest performances, but at the same time the driver is left cold by the lack of excitement the current formula is giving him.

Consequently, whether he remains in F1, even to the point of seeing out his contract with McLaren - which has another year to run - depends a lot on what the new regulations produce.

"I'm 35 and I could go on for more years but it's all about motivation and willingness," he Cadena Ser radio. "I'm just thinking about next year. We will see how I feel when the time comes, if I sign a contract extension.

"The hunger is always there," he continued. "After one year and a half without being close to the podium, I have more motivation. I come out as a lion in every race."

Referring to his main gripe, the current formula, he said: "I've said the same for the past two years. Today's cars are less attractive, more boring than to a few years back. It's not the Formula One that we used to know in the first ten years I was racing. Now you don't have that 'wow' feeling, or think 'I can't believe how fast I was through that corner', or 'it's incredible how fast this car is'. You don't have that now, it's much more like normal cars, more boring.

"Today, we spent all race saving tyres, saving fuel," he said, referring to the Singapore race in which a determined drive still only resulted in a distant seventh place, finishing ninety seconds behind the winner. "That goes against a driver's instinct, which is pushing to the maximum.

"Next year, with the change of rules, the cars are going to be five seconds faster and I'm hopeful that Formula One will be more attractive for the driver," he admitted. "And if it's still a Formula One about saving instead of attacking then I'll think if I continue or not, but not because I'm thinking of retiring. There are other things that I want to do.

"The rules will play a key role," he insisted. "If the cars are exciting when you drive them and you are left with that feeling of surprise that Formula One has always had, then you are having fun, regardless of the results.

"In twelve months we'll see where we are and how keen I am to continue, because maybe I see the chance to leave F1 and then I think what I am going to do at home all day. We have to wait and see."