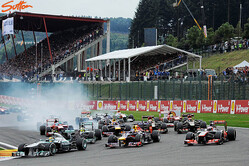 There is absolutely no doubt that Formula One is a complex business. The company structure is set up like a cat's cradle with each business having its own function and payments shuttling between them. Many observers attribute this solely to Bernie Ecclestone but in fact this is not the case.

It is indeed true that Ecclestone set up a complex business web for F1 but it became even more labyrinthine with the arrival in 2006 of the sport's current majority shareholder, the private equity firm CVC. The structure now includes over 30 companies in seven jurisdictions so it is easy to get confused. There's no problem at all with that but if that confusion concerns proceedings in a court room it is a different matter.

During the past week Ecclestone has been giving evidence at the High Court in London where he is being sued by former F1 shareholder, the German media rights firm Constantin Medien. The case puts a spotlight on just how complex the business of F1 really is.

Its lawsuit claims that Ecclestone and his Bambino family trust paid a £27.5m ($44m) bribe to BayernLB's former chief risk officer Gerhard Gribkowsky to ensure that he sold the 47.2% to CVC. Constantin says that CVC was Ecclestone's preferred buyer for the shares as it had agreed to retain him as F1's boss. In 2011 Constantin filed the lawsuit against Ecclestone, Gribkowsky, Bambino and its former lawyer Stephen Mullens.

The question of how much the stake was worth is far from a black and white matter. No other bidder offered more than CVC and numerous offers were considered. So, if you take the value of something to be the price it achieved in a bidding process then it is £508.3m as CVC paid. However, Constantin claims that the stake should have gone for more because an alleged bribe was paid. To prove this Constantin needs to show that a bribe was paid and that the stake was worth more than the £700m threshold.

The vast majority of evidence which is said to support these two points is, to put it simply, ancient history. The reason for this is that the stake was sold to CVC in 2006 and the alleged bribe was paid in the two years after that. It explains why the case has not yielded any news which is relevant to F1 today. Instead the news has focussed on the events of 2006 and earlier which doesn't make it easy for the sports pages to cover.

The vast majority of Sylt's newspaper reports are exclusive news which has never before been reported such as the reduction in the damages claim. In contrast, sports reporters for several papers and news wires are doing conventional court reporting on the events disclosed in court even though it is perhaps not what they would usually cover.

The challenge for them is the complexity of the material and how to make it relevant to their readers. The latter point is the toughest nut to crack given that the details of the case tend to cover events which are six or seven years old rather than say the results of a race or a match which took place earlier in the day. It means that the sports reporters are likely to latch on to anything sports-related which comes up in the court hearings. This brings us to the news which came to light over the past few days.

The news concerns payments made to several teams way back in 2001. The offer to the teams was made even further back than that in February 1998. At that time, an Initial Public Offering (IPO) of shares in F1 was being planned and in order to ensure that the stock market flotation raised as much money as possible, all of the teams needed to be signed up to a Concorde Agreement - a long-term contract to remain in the sport. As Bambino's QC Mark Hapgood explained in court on 1 November, "what happened was that the teams were given an option of receiving either some shares in the IPO or $10 million in cash. In the event, four of the teams opted to receive $10 million in cash."

Mr Hapgood pointed out that if the teams had not been paid, regardless of whether there had been a stock market listing of F1, they could have sued F1's parent company SLEC for damages. "A claim in contract would have failed because the condition precedent, namely the listing, had not taken place. But a claim in damages would have had very good prospects." He explained that the reason for this is that "if you say to someone 'if you confer a benefit on me I will do something for you', if you create that legitimate expectation, you cannot, yourself, as offeror, frustrate the expectation which you've created." In summary, the teams which accepted the $10m payment needed to receive it.

In 2001 the teams asked for the money and it was paid, "partly because there was force in that point, and partly in the interests of good relations," according to Mr Hapgood. On Thursday it came out in Ecclestone's testimony that the four teams were Arrows, Jordan, Prost and Williams. They may be blasts from the past but the names were familiar territory for the sports reporters.

What's more, it was revealed in court that the money was not paid to the companies which ran the teams but to the owners. Constantin's QC Philip Marshall described this as "a very odd thing to be doing" but Ecclestone responded that the owners probably asked for the money so they could pay it into their companies.

It gave the sports reporters something to latch on to and the concept involved is not a tricky one - team owners were paid in return for agreeing to sign the 1998 Concorde Agreement. The concept may not be tricky but it still requires a good working knowledge of the fiendishly-complex F1 company structure in order to report it accurately.